Nocode functions is one year old!

In this post, I celebrate the first anniversary of nocode functions!

Key facts over the past year

According to the Wayback machine, I have launched nocodefunctions around May 2021. Since then, it:

The long-term objective with nocodefunctions is to provide a free, user friendly, robust web app helping a variety of audiences to use common (but sophisticated) data analysis functions, offered in their best-in-class versions.

After a year, this objective has started being fulfilled. I got informal reports about use of nocodefunctions in classrooms, in academic research and by governing bodies.

Another objective for nocode functions is to serve as a testbench for the new functions I develop, as an academic researcher. Bringing a function to the app forces me to go beyond the development of an algorithm. I now must also develop a web interface for it (in 107 languages!), so that it can be featured on https://nocodefunctions.com.

This is exactly what happened last month with the development of a new text mining technique that performs sentiment analysis and provides a detailed explanation of the result - again, in 107 languages. While I am writing the academic paper that will develop the internals of this technique, the function is already available on the front page of nocode functions, and as an API as well. It helped me get feedback to improve on it (thank you Verónica!).

Here is an example analyzing “I hate to say it, but this actually tastes great” 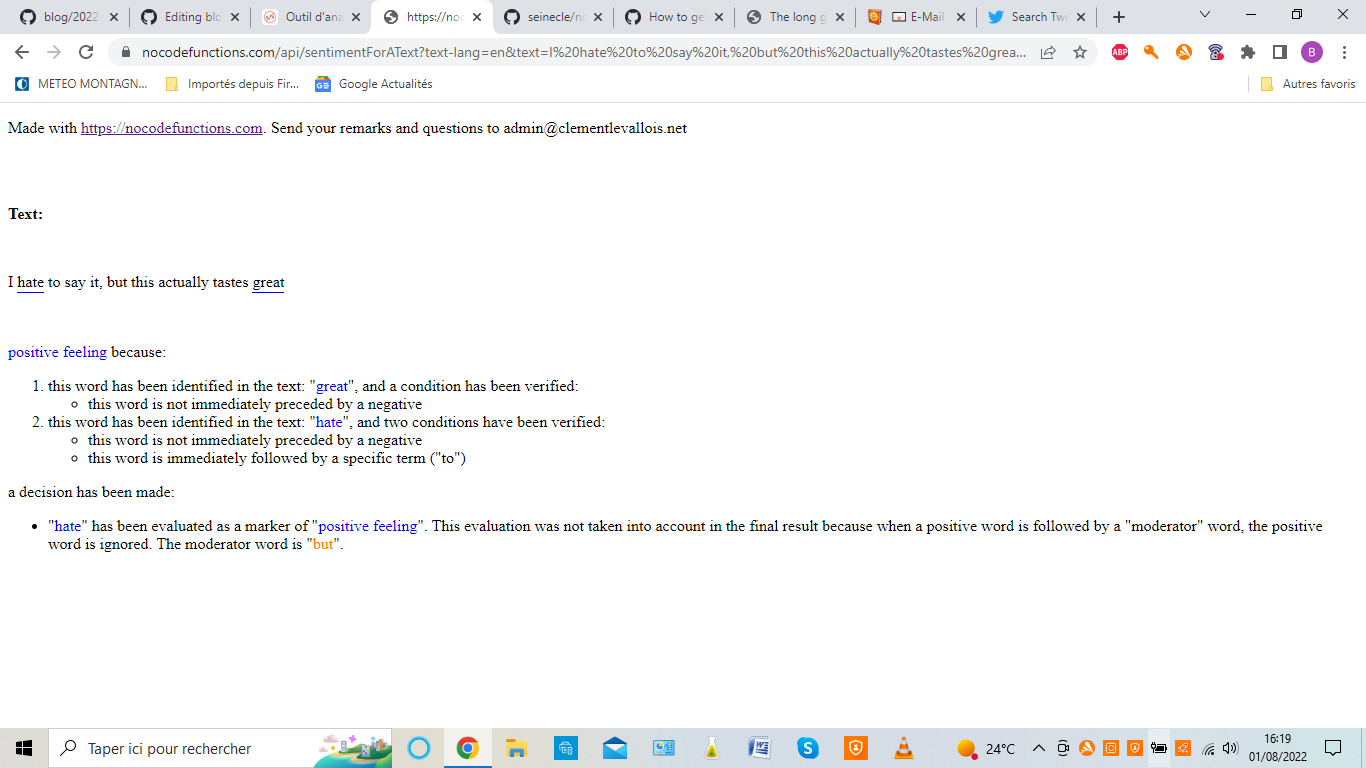 Try it by yourself with this link or visit the page that explains how to use it.

The next steps consist in going slowly and surely. The goal will remain to provide a free, no-registration, click-and-point experience to execute data analysis functions of the best quality.

I will improve the documentation, starting with submissions to academic journals that specialize in relevant topics. The doc on Github will also get some love, so that this open source project can become easily re-usable.

The Twitter import will get improved, so that we can go beyond 100 tweets (🤦) and also with a complete user-friendly access to all the subtelties of the query parameters available in the v2 of the Twitter API (there are a lot).

The code of the app will be refactored, with robustness and elegance in view. At the moment, the code of the app includes the web pages and some back-end code to make it work. The functions themselves are located in separate repos. Good, but this modular principle should be pushed a bit further, so that the codebase for nocodefunctions ends up including just the web interface, really. In particular, the logic to import files, and to export the results, should go in separate modules.

Following user reports, I will improve the UX, which remains less than perfect. The goal is to have a user complete an analysis in just a minute - the time to upload a dataset and to click on a “compute” button.

That’s all I can think of for now.

This app is truly built on the shoulders of giants. Fully developed in Java using Netbeans as a coding tool, I thank the community for developing such a versatile, robust, easy-to-use programming language and tooling. Thanks also to all the maintainers of the libraries that provide specific features. And thanks to all the users who provided feedback, big or not, anonymously or not. Find the detailed list of acknowledgements here.

I build nocode functions for you. Try it and give some feedback, I would appreciate it!